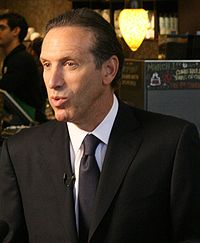 According to Schultz, this event was one of the most important things that galvanized the culture of Starbucks again– and he made the enormous investment despite opposition from angry shareholders who didn’t understand how the expense of the event would benefit the company.

As for lessons learned about preparing the company for the future, Schultz says that great brands provide an ongoing emotional connection and sense of discovery, and this comes from building the brand from the inside.

Which is why, while he has good things to say about his CEO predecessor Jim Donald, he admits that his weakness was not having a successor ready from within the company. According to Schultz, it is a steep challenge for someone from the outside to continue to stay true to the culture and values when things go awry. He does not plan to make this mistake again– his successor at Starbucks will come from within.

Schultz summed up his thoughts about the company culture this way:

When you love something, when you care so much, when you feel the responsibility… you find another gear.

And from hearing him today, it sure sounds Starbucks has once again found that gear. I’ll end with a quote from Schultz that appears at the end of the documentary above, describing the experience of bringing his team back together in New Orleans:

There is a word I think of when I think of Starbucks. And it’s love. We love what we have built here. We love the experience we have created for our people. Somehow, along the way, the level of that feeling got somewhat blurred by success. That is one of the things I think will be very apparent in this week about what it means to love something… and then the responsibility that goes with that.

If so, you can find more tips about how to build your brand effectively in my book, The Ad-Free Brand (not an advertisement, mind you, just a friendly suggestion:).

Chris Grams is Head of Marketing at Tidelift. He is also the author of The Ad-Free Brand: Secrets to Successful Brand Positioning in a Digital World.
View all posts by Chris Grams »
« What can community leaders learn from dancing Sasquatch guy?
The Adaptable Company: Gary Hamel’s new book that isn’t »

6 thoughts on “Howard Schultz of Starbucks: The role of culture in a crisis”