This tag is associated with 5 posts

Why does brand positioning matter and what must change?

I believe almost all great brands are built on a foundation of great positioning.

This last way is the ad-free brand way of developing brand positioning. 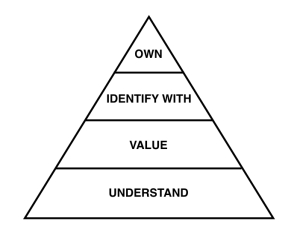 Why does great positioning matter? In my view, there are four key reasons brands should care about positioning.

The best brand positioning is always simple and clear. The greatest product or organization in the world won’t be successful if people can’t or don’t bother to comprehend why they should care about it. Your story must be able to break through the clutter.

Getting people to understand the brand is the first step, but no less important is ensuring they value the brand. The best brands stand for things people care about or desire.

It may sound like a brand’s worst nightmare to lose control and have the brand community take over. But the most self-actualized brands of the twenty-first century allow the communities of people surrounding them to take some ownership of and responsibility for the brand. Essentially, the brand owners become in command and out of control of the brand.

In 1981, when Jack Trout and Al Ries wrote Positioning: The Battle for Your Mind (the book that really defined the discipline of brand positioning) traditional advertising was still a dominant force. In fact, as you glance through their book, you’ll notice that most of the examples they use to illustrate positioning concepts are classic advertisements or advertising campaigns like the Avis “We’re #2, so we try harder” or the 7-Up “Uncola” campaign.

In the book, Trout and Ries define positioning as follows:

The Trout and Ries definition is a perfect way to achieve the first three of the four benefits above; it helps people understand, value, and identify with the brand.

By giving the communities of people who care about a brand some ownership over its future direction, we begin to build relationships based on trust, respect, and a mutual exchange of value.

Where 21st century brands will really shine is by mimicking the open, collaborative, meritocratic model of the open source software movement (and the Internet itself) in their positioning work. In my view, without beginning to engage the communities of people who care about a brand as co-owners, classic brand positioning by itself will continue to be less and less effective as traditional advertising and PR continue to be less and less effective.

The secret? Marrying those classic brand positioning principles to a 21st century way of collaborating with the communities of people who care about a brand. By doing both together, we’ll be able to build stronger, more resilient brands than ever before.

This is the second in a series of posts drawn from The Ad-Free Brand, which is available now.

END_OF_DOCUMENT_TOKEN_TO_BE_REPLACED

Tom Sawyer Part 2: where can your company pitch in?

A few weeks ago I wrote a post called Tom Sawyer, whitewashing fences, and building communities online, where I outlined one of the biggest mistakes I see companies make when figuring out their community strategy– they expect a mythical “community” will paint their fence for them. But not everyone is Tom Sawyer. 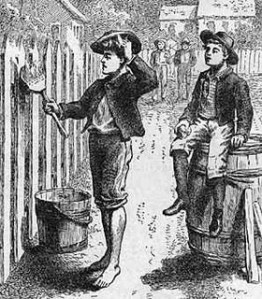 If your community strategy starts with the question, “how can I make the community work for me?” you may still find success if there are a bunch of people out there willing to paint your fence for free, but you definitely are not taking advantage of all of the benefits you can get from participating in communities.

One of the most often used examples of customer/community-driven innovation (perhaps because it is simple to understand) is the My Starbucks Idea site. This is a place where customers can tell Starbucks what they want, people vote on each others’ ideas, and Starbucks takes the best ideas and uses them to make their products, services, and experience better.

A recent example of a service that was launched through the site is a mini Starbucks drink card that can fit on your key chain. Sweet. It looks like they’ve had at least 5-10 innovations like this that have come from customer ideas, maybe more. And Starbucks is not alone– many companies have built similar sites, as has The White House. You’ve seen them.

But this approach is still simple Tom Sawyer-style community-building. People just helping Starbucks paint their fence for free. So why is it working for Starbucks? Because there are people out there willing to spend their time and energy helping Starbucks make their products, services, and experience better. Not every brand can command this sort of attention and loyalty. Most can’t, in fact.

My view? I do think these sort of public idea generation efforts are smart 21st century thinking when they work. But why stop there?

I get excited when I see big companies focused not only on what they take from the table, but what they bring to the table. I love to see companies that aren’t afraid to be humble members of communities, rather than building the community around themselves.

END_OF_DOCUMENT_TOKEN_TO_BE_REPLACED

On Twitter yesterday, my friend Chris Blizzard mentioned to someone that I often say “brands are like sponges.” When I saw this, I realized that a) I haven’t said this in a while and b) I should say it more often because it is a freakin’ awesome way to think about brands. So I’m saying it again right now. Right here.

A brand is like a sponge. Except it is probably dirtier than this one.

It’s actually not my line. I got it from the Scott Bedbury book A New Brand World (one of the top ten books behind Dark Matter Matters). Near the beginning of the book, Scott, who is one of the masterminds behind the good ol’ days of the Nike brand in the 80s and the Starbucks brand in the 90s, provides one of my favorite definitions of what a brand is:

A brand is the sum of the good, the bad, the ugly, and the off strategy. It is defined by your best product as well as your worst product. It is defined by award-winning advertising as well as by the god-awful ads that somehow slipped through the cracks, got approved, and, not surprisingly, sank into oblivion. It is defined by the accomplishments of your best employee– the shining star in the company who can do no wrong– as well as by the mishaps of the worst hire that you ever made. It is also defined by your receptionist and the music your customers are subjected to when they are placed on hold. For every grand and finely worded public statement by the CEO, the brand is also defined by derisory consumer comments overheard in the hallway or in a chat room on the Internet. Brands are sponges for content, for images, for fleeting feelings. They become psychological concepts held in the minds of the public, where they may stay forever. As such, you can’t entirely control a brand. At best you can only guide and influence it.

Those last two lines have stuck in my mind since I first read them. First, the idea that a brand is a sponge, soaking up everything, both good and bad. And second, that you cannot control a brand, you can only guide and influence it.

END_OF_DOCUMENT_TOKEN_TO_BE_REPLACED

Competitive frame of reference is a fancy way of saying “the market you compete in.”

Those are pretty cut and dry cases. But have you ever stopped and wondered to yourself, “exactly what market am I competing in?” and realized that you are really competing in a market that is not initially obvious? Or that you are actually competing in multiple markets? If either of these situations are true, you may discover you need to create points of parity and points of difference for each market where you compete.

Here is an common example of a less-than-obvious competitive frame of reference.

What market do you think Starbucks is in? The coffee market? Maybe. In the coffee market, Starbucks competes with grocery stores, fast food restaurants, other coffee shops, and home brewers. Tough market… they aren’t competitive in the coffee market on price, there are probably options that (arguably) taste better, maybe have shorter lines. It’s hard to believe that Starbucks would have grown as big as they are by simply competing in the existing coffee market.