Books are important to me. Growing up, almost every free wall in my parents’ house was lined with bookshelves, some of them stacked two deep.  I spent most of my pre- Red Hat career in book publishing, first working during college at The University of North Carolina Press. After college, I went to work for a literary agent named Rafe Sagalyn in Washington DC. Working for Rafe was a great experience because he built his reputation on big think/idea books and business books.

His first big book was the huge bestseller Megatrends by John Naisbitt back in the early 80s. When I was there, I personally got to work with, among others, Bill Strauss and Neil Howe on their great books about generational patterns in society (check out The Fourth Turning… very prophetic these days) and Don Peppers, author of some books back in the 90s like The 1:1 Future about relationship marketing that were the grandparents of today’s books on social media marketing.

I also got to play agent and author myself too. As an agent, I represented some of Tom Bodett’s work (yes, he is the Motel 6 guy, but was also a commentator on NPR) and sold a wonderful novel called The Frequency of Souls to FSG. As author, I helped Rafe write two “cutting edge” books about getting free and open access to government information (they have not aged well, I’m afraid).

Fast forwarding to today, Rafe actually was the agent for two recent big think books that I love, Authenticity and A Whole New Mind, so he is still making things happen.

After I left book publishing, reading became fun again. I read novels and travel literature for a while, nothing that made me think too much. But when I got to Red Hat, I relapsed and started reading the big think books like the ones I used to work on with Rafe. I thought it might be worth taking a few minutes to try to remember the books that have been the biggest influences on my thinking, and get them all down in one place, so here goes:

Without these ten books, Dark Matter might not even matter to me.

END_OF_DOCUMENT_TOKEN_TO_BE_REPLACED

A Twitter friend asked me the other day if I had been doing any more thinking about open brands. Turns out I have. Two weeks ago, she and I had a conversation where we discussed how Red Hat had opened up the Fedora brand and the positives (tons!) and negatives (some) of doing so.

This week, on an plane ride up to Boston, I read the book The Open Brand by Kelly Mooney, which another friend had handed to me a while back.

The book is a eulogy for brands that are not willing to open themselves up, and an instruction manual for those that are considering becoming more open.

It was particularly interesting to read as a Red Hat guy, because the book is based on the idea that today’s single most powerful technology is “a mashup of the World Wide Web and the open source movement.”

The book opens with the question… “are you dangerously CLOSED?”

Whew… passed that one. But the book did make me think some about where the Red Hat brands fall on the spectrum of closed to open.

END_OF_DOCUMENT_TOKEN_TO_BE_REPLACED

In all likelihood, your budget is shrinking.

Based on your unique situation,
Based on your costs and your estimated results,
Depending on your desired outcomes,
Backed by extensive research,
Do you know how much your organization can save???

Pinpoint  where your business can immediately
save money and maximize profits.

Determine the optimal spending level,
Calculate the increased profit potential,
drag the sliders below,
analyze and validate the effectiveness,
see if you are still on budget.

END_OF_DOCUMENT_TOKEN_TO_BE_REPLACED 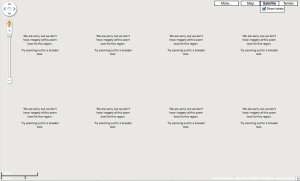 Have you ever been zooming in on a Google map, and eventually you zoom so far in that Google apologizes and tells you that it doesn’t have an image showing stuff that close? What do you do? You zoom back out so that you can see again.

When it comes to running campaigns, I tend to take metrics with a few grains of salt. How many times have you seen someone report metrics on how their campaign did, and they show that it drove zillions of leads and that converted to zillions of $$ in sales and was a huge success… but then you look around and can’t find anyone who saw the campaign, or heard of it. And the sales guys couldn’t ever even tell it happened.

END_OF_DOCUMENT_TOKEN_TO_BE_REPLACED

In command and out of control as marketing strategy

In my last post, I talked about the idea that General Paul Van Riper called being “in command and out of control” as a corporate leadership strategy. But can you also apply the same principle as a marketing strategy?

A traditional marketing campaign usually looks something like this:

When we are at our best at Red Hat, we have a leadership culture instead of a management culture.

The story is about US General Paul Van Riper, who is trying out some military strategies to see how they will work in the field. In the book he says:

“The first thing I told my staff is that we would be in command and out of control.”

Most companies have a culture of management. The people in charge are in command and in control of everything. Managers give the orders, decide the strategy, and the workers follow the orders, implement the strategies. This is the way 90+% of businesses work and have worked for a very long time. It’s a good model for lots of businesses. Keeps things running efficiently, keeps chaos in check.

This model does not work very well in an open source world. Why? A couple of key reasons: END_OF_DOCUMENT_TOKEN_TO_BE_REPLACED

Only about 4% of the total energy density in the universe can be seen directly.
About 96% is thought to be composed of dark matter or dark energy.
(Wikipedia)

July 2009: See my update on the topics covered in this post here.

I’ve been intrigued by the idea of dark matter for a while. But it was actually hearing about this thing called the Large Hadron Collider that helped me make the connection between what I do for a living and this concept of dark matter.

The Large Hadron Collider is the world’s largest particle accelerator. It was built on the border of France and Switzerland and is about 17 miles long. One of the things that particle physicists hope to prove with this enormous project is that dark matter actually exists. As I understand it, the accelerator shoots protons at super high speeds around the collider, and, if these scientists are lucky, it eventually might produce a few wacky particles that will exist for only a few milliseconds and then disappear again. And these particles might prove that dark matter isn’t just a theory. END_OF_DOCUMENT_TOKEN_TO_BE_REPLACED