Customer-driven innovation in the White House?

This week, the White House is holding a two day experiment at www.whitehouse.gov where Americans can ask Barack Obama any question they have regarding the economy. People can enter their own questions or vote on the questions of others. Later this week, Obama will address many of the most popular questions in a national town hall meeting.

In the video on the site, Barack Obama says:

One of my goals as president is opening up the White House to the American people so that folks can understand what we’re up to and have a chance to participate themselves.

In the open source world, we often talk about the idea of user or customer-driven innovation. We make the process of creating open source software transparent and collaborative. Customers can easily contribute their ideas, and we both share in the value that is created– we make better software faster, our customers get better, more relevant software faster. Everybody wins.

How cool is it to see the same principle applied to government? By opening the feedback loop to us regular Americans– the “customers” of our government– might we be able to create a better government faster? Could the old open source adage, “Given enough eyes, all bugs are shallow” apply to governing the American people as well?

As of when I wrote this post, about 40,000 people had voted 1.5 million times times on over 40,000 questions. The site is open through Thursday morning at 9.30 AM, so go ask your questions and vote!

One note… the people from the “Legalize it!” lobby and the “show us your birth certificate” lobby both found this site before you… But don’t worry, in the meritocracy of whitehouse.gov, the best ideas seem to still be winning:)

Brand and human resources in one department? Are you nuts?

A few months back, Red Hat rearranged a few organizational boxes, as companies tend to do from time to time. One result of this was the creation of a new department called People & Brand, a combination of the existing Red Hat Human Capital team and our Brand Communications + Design team.

When some folks hear that, their faces crinkle all up in confusion and they say something akin to “That doesn’t make any sense… brand is a marketing function, not an HR function!”

Look at the statement above again: “Brand is a marketing function, not an HR function.”

END_OF_DOCUMENT_TOKEN_TO_BE_REPLACED

Got a piece of spam in my inbox the other day that was good enough to inspire a piece of markepoetry all by itself. This short piece takes the form of a haiku, entitled “Harness the power of social media.” Sometimes art shows up when you least expect it.

Harness the power of social media

Use the sheer power

Markepoetry is the language of marketing, made beautiful.

On a recommendation from Michael Tiemann, I got the book Conversational Capital: How to Create Stuff People Love to Talk About by the folks at Sid Lee, who have done work for brands like Cirque du Soleil, Adidas, and Red Bull.

Michael had sent a note at Red Hat a few months back where he said this book helped him understand the “x-factors” that had allowed Red Hat to create a strong brand position at such a small, young company. Thought I should check it out.

In case you were wondering, that headline above is an example of Relevant Sensory Oddity, one of the topics they cover in the book. I thought I’d try it and see if it works:) I actually am wearing pants. Today.

The main thesis of Conversational Capital is that there is a more powerful way to get consumers engaged with your brand by “making your story part of their story,” creating stories or experiences that are meaningful to them. The authors turn their noses up at “buzz marketing,” equating it to style over substance, with no depth or continuity, all sizzle and no steak.

END_OF_DOCUMENT_TOKEN_TO_BE_REPLACED

A Twitter friend asked me the other day if I had been doing any more thinking about open brands. Turns out I have. Two weeks ago, she and I had a conversation where we discussed how Red Hat had opened up the Fedora brand and the positives (tons!) and negatives (some) of doing so. 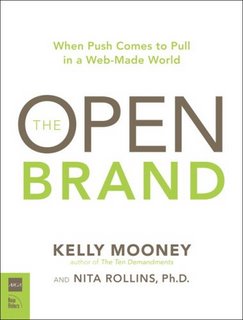 This week, on an plane ride up to Boston, I read the book The Open Brand by Kelly Mooney, which another friend had handed to me a while back.

The book is a eulogy for brands that are not willing to open themselves up, and an instruction manual for those that are considering becoming more open.

It was particularly interesting to read as a Red Hat guy, because the book is based on the idea that today’s single most powerful technology is “a mashup of the World Wide Web and the open source movement.”

The book opens with the question… “are you dangerously CLOSED?”

Whew… passed that one. But the book did make me think some about where the Red Hat brands fall on the spectrum of closed to open.

END_OF_DOCUMENT_TOKEN_TO_BE_REPLACED

David Burney’s blog post about Obama being the first “design thinking” president just got picked up by Bruce Nussbaum of BusinessWeek. Nussbaum is another one of those guys who gets it– he’s been writing about design thinking and innovation in business for quite some time.

How to successfully compete with open source software

Found an interesting post via a Twitter friend today with ideas on how proprietary software companies can compete with open source software. The guy who wrote it isn’t an open source hater, in fact he says he uses plenty of open source software for his own websites. His post also covers open source applications catering to consumers rather than businesses, so it’s not exactly Red Hat that he’s talking about here, but I still thought the ideas were worth taking to heart.

The first three ways he says you can successfully compete with open source software are, in this order 1) marketing 2) design 3) user experience. His reasoning? From the post:

I think he is on to something here. We open source software people do tend to sometimes fall in love with our software and how it is made and works, rather than falling in love with our customers and how we can understand and solve their problems. It is easy to agree with this in theory I’ve found, but in reality, it is a lot harder to stay focused on the customer’s needs when there is all this cool software to be made:)

END_OF_DOCUMENT_TOKEN_TO_BE_REPLACED

Cutting cubes out of clouds: The Designful Company

Promised a while back that I’d write a review of Marty Neumeier’s new book The Designful Company once i’d finished it, so here goes.

As I’ve said before, I’m a big fan of Neumeier’s work– especially The Brand Gap, which has been a key bit of inspiration for the Brand Communications + Design group at Red Hat. The Designful Company is subtitled “How to build a culture of nonstop innovation,” and there are some pretty great ideas within on how to do exactly that.

It is clear that Neumeier is well read and well traveled in the right circles. He draws upon ideas from many current innovation thought leaders, including Gary Hamel, Roger Martin, Sam Lucente, Steve Jobs, and more. In fact, the recommended reading list in the back of the book is worth the price of the book itself.

END_OF_DOCUMENT_TOKEN_TO_BE_REPLACED

My good friend, former boss, and Swingin’ Johnsons bandmate, David Burney, has revealed his new venture, a company called New Kind. He’s partnering with Matt Munoz, an extremely talented designer who created the original Fedora logo (an interesting open, collaborative process to be discussed in another blog) among other things.

Both David and Matt come from graphic design backgrounds, but their firm intends to explore the role of design in business from a “new kind” of perspective. According to their website:

New Kind helps organizations solve complex problems and build competitive brands. We do so by combining the problem-solving principles of design thinking with the collaborative power of open source. We help our clients create authentic customer communities, build and nurture innovative cultures and tell meaningful, memorable stories through the most relevant media choices.

David is actively blogging on some interesting stuff, including Barack Obama and MBAs, Gary Hamel, and orange juice. Do it. Click on the orange juice link. You know you want to.

Finally, a note about our brand. It’s one of our biggest assets. Mention Yahoo! practically anywhere in the world, and people yodel. But in the past few years, we haven’t been as clear in showing the world what the Yahoo! brand stands for. We’re going to change that. Look for this company’s brand to kick ass again.

Wow. Even I wouldn’t use the word “ass” in my blog (or would I???). But clearly she feels strongly– Yahoo’s brand has fallen a long way since its heyday. Our internal brand survey data shows that even little ol’ Red Hat has surpassed Yahoo, at least among business audiences, as a defining technology company.

So what happened? She’s right– Yahoo lost its way. But I still have a soft spot for Yahoo, one of the first big Internet brands, and wish Bartz the best of luck with the rehabilitation. The Rx? One dose of Jack Trout & Al Ries, followed by Jim Collins & Jerry Porras, taken with a 12 oz glass of water on a full stomach. Call me in the morning, let me know how you feel.