The latest in the search for dark matter

As people who’ve been reading this blog for a while know, it’s called Dark Matter Matters because I see some similarities between the struggle that physicists and astrophysicists are going through attempting to find and measure dark matter and dark energy in the universe and the struggle among marketing and communications professionals trying to quantify and measure the value of their investments in brand, culture, and community. Read more in my intro article here. 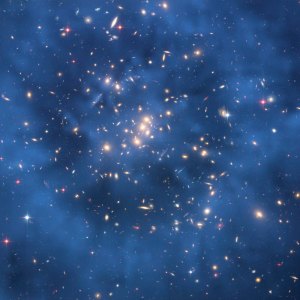 A picture from the Hubble Space Telescope. The fuzzy stuff might be evidence of dark matter.

From time to time I like to keep all the marketing folks up to date on how their colleagues in physics are doing on the whole dark matter thing, and there’s been some interesting news over the past week.

First, there was an article in the New York Times on Saturday saying that scientists have discovered a mysterious haze of high-energy particles at the center of the Milky Way. Some think these particles may be the decayed remains of dark matter. From the article:

At issue is the origin of a haze of gamma rays surrounding the center of our galaxy, which does not appear connected to any normal astrophysical cause but matches up with a puzzling cloud of radio waves, a “microwave haze,” discovered previously by NASA’s WMAP satellite around the center. Both the gamma rays and the microwaves, Dr. Dobler and his colleagues argue, could be caused by the same thing: a cloud of energetic electrons.

The electrons could, in turn, be the result of decaying dark matter, but that, they said, is an argument they will make in a future paper.

Clearly the authors of the research are still hedging their bets, and other scientists apparently believe the findings are inconclusive. There will need to be still more research before anything gets proven for sure.

Meanwhile, our good friends in charge of the Large Hadron Collider, which has been out of commission for the last year, are about ready to roll again after the massive failure last September that caused catastrophic damage. The Large Hadron Collider is an enormous, multi-billion dollar supercollider built underground beneath France and Switzerland by physicists trying to prove, among other things, the existence of dark matter (funny side note, read this article about how the collider might be being sabotaged from The Future). Good article in The Guardian yesterday here on the current status. From the article:

Cern scientists have begun firing protons round one small section of the collider as they prepare for its re-opening. Over the next few weeks, more and more bunches of protons will be put into the machine until, by Christmas, beams will be in full flight and can be collided.

The LHC will then start producing results – 13 years after work on its construction began.

So stay tuned. The physicists are getting closer– if only we marketing folks were doing as well!

Chris Grams is Head of Marketing at Tidelift. He is also the author of The Ad-Free Brand: Secrets to Successful Brand Positioning in a Digital World.
View all posts by Chris Grams »
« Love, hate, and memo-list
Maslow’s hierarchy of (community) needs »