In the whirlwind of Chris Brogan, author of Trust Agents

Last week I was on a panel with Chris Brogan, author of (with Julien Smith) the NY Times bestselling book Trust Agents. Also on the panel were Robert Cook (founder of Freebase and Metaweb), Gary Slack (Chairman of Slack Barshinger and head of the Business Marketing Association), and June Arunga (partner at Black Star Lines and one of Fast Company’s 100 Most Creative People in Business). The panel was moderated by Sree Sreenivasan (Dean of Student Affairs at Columbia Journalism School and regular TV commentator). 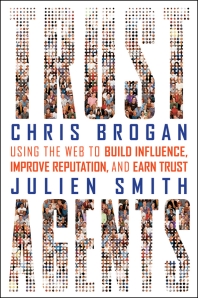 After looking up the kickin’ credentials of each of these folks, I figured I’d better get my act together and do some research so I wouldn’t immediately out myself as the weak bulb. As part of my homework, I picked up a copy of Trust Agents to read on the plane.

So I buy this book, sign up for Chris’s Twitter feed, all the normal stuff. It turns out Chris has almost 100,000 followers on Twitter, and almost every post on his blog gets like 50 or 100 comments (and most of them seem really nice and friendly, us open source folks aren’t used to that).

His Twitter feed almost looks like a breathing rhythm, with tweets coming in and out every few seconds. You could probably even calculate how much sleep he gets by putting the times of his first and last tweets of the day for a month in a spreadsheet and averaging out the results. If I hadn’t seen him sneaking some tweeting in under the panel table via his phone, I’d guess TweetDeck was directly wired into his brain.

OK, cut to it. The book is great. I really dug it. It turns out it isn’t so much about social media as it is about building relationships, building trust, being helpful, being useful, being nice, and a bunch of other stuff your mom told you to do when you were younger. After reading the book and spending an afternoon with Chris, it’s pretty obvious how he’s been so successful. He’s just really, really freaking nice.

From the book, here is his strategy:

When people ask Chris how he got to be where he is in social media, his answer is always the same. Be helpful. Being helpful refers to many different things: It’s a genuinely nice way to interact with people; it’s a content creation strategy (people keep useful blog posts around longer); it’s a guidepost to deciding what’s worth doing; and, most often, it’s the right thing to do.

So that’s it? The whole secret to success with social media is being a decent human being? And here I thought it was all about “leveraging relationships” and “fair exchanges of social capital” and other stuff like that. It turns out that kind of talk makes Chris a bit queasy too. Probably the paragraph that brought the book home for me doesn’t occur until page 125, when Chris discusses the right approach to developing relationships with others online.

Doing favors so that people owe you favors must not be the motivation behind developing these relationships. Do favors because you like someone, because it’s the right thing to do, or because you like to be helpful. The result is that you accrue social capital as a side benefit of doing good, but doing good by itself is its own reward.

Is it wrong for you to think what you do for someone will be (eventually) reciprocated? No. Is it wrong to expect it? You betcha. Don’t operate with favor trading in mind… Instead just create goodwill. You’ll see better results and sleep better at night. We promise.

So reading this book and then spending a day in the Chris Brogan whirlwind… did the brand promise he outlines in the book match the Brogan brand experience?

Absolutely. Chris started being helpful to me on the day of the talk before I even met him. On his Twitter feed at 7:08 AM, he posted:

Wearing a suit to today’s meeting. How rare – http://twitpic.com/gyjzp.

Now that was helpful. I was wondering what the other panelists would wear, now I knew at least one of them was wearing a suit and tie, and he’d even given me a picture. I might have been the only person on earth that was helpful to, but it was very helpful (I didn’t wear a tie anyway, ties are for suckers).

Later that night, well after the event was over, another post shows up on his Twitter feed at 9:14 PM:

Now that was helpful! Within two hours of him posting the link to my blog, I’d gone from an average to record traffic day for Dark Matter Matters. Amazing. The guy can drive some traffic.

And the next day, when Chris wrote an entire blog post about our conversation on chrisbrogan.com, and linked to our little Red Hat Way video on YouTube (which went from under 1,000 views to almost 3,000 a few days later), I was thinking to myself… you guessed it… now that was very helpful!

And look. Here I am now writing a review of his new book Trust Agents on my blog. I just exchanged social capital! Do I feel tricked? Do I feel used?

No, I feel honored to do it.

And that’s the power of Chris Brogan.

Chris Grams is Head of Marketing at Tidelift. He is also the author of The Ad-Free Brand: Secrets to Successful Brand Positioning in a Digital World.
View all posts by Chris Grams »
« Test my theory… when it comes to community, are the words “monetize” and “kill” interchangeable?
Does transparency really have to start on day 1? »