A few weeks ago I finished the new Jim Collins book How the Mighty Fall and Why Some Companies Never Give In. If you read this blog much, you’re probably sick of me prattling on about how much I love Jim Collins’ work (here, here, and here). Over the years at Red Hat, we’ve based many projects related to the values, mission, and other corporate-level structural thinking on ideas we got from him. 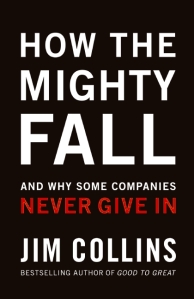 Well, it’s been almost eight years since Collins wrote his last full-length book, Good to Great (which ranked number one on my list of the top ten books behind Dark Matter Matters). How the Mighty Fall is a short book, and in it, Collins is clearly a bit on the defensive about his previous work. The issue? In the economic meltdown last year, some of his Built to Last companies didn’t last, and some of his Good to Great companies are back to good… or gone.

Collins explains it this way:

…the principles in Good to Great were derived primarily from studying specific periods in history when the good-to-great companies showed a substantial transformation into an era of superior performance that lasted fifteen years. The research did not attempt to predict which companies would remain great after their fifteen-year run. Indeed, as this work shows, even the mightiest of companies can self-destruct.

So this book is Collins’ attempt to discover why exactly some very good companies went oh so very bad. If Good to Great was Star Wars, this book is The Empire Strikes Back— a long, hard look into the dark side (even the cover is black).

Collins did extensive research using an interesting approach. He studied these companies, not as history has judged them, but based on what the company was saying, what the press was saying, what financial analysts were saying during the time period being studied– before we knew the outcome. And all of the research was done in historical order, almost like he was following the companies through time.

The results of the research play out like a Greek tragedy. He identified 5 stages of decline in the companies that had gone from great to… not so great:

I’ll let you buy the book and read the stories, but just know there are some harrowing tales in here. The warning signs seem obvious now in retrospect… but let’s just say they were dangerously opaque to the people running the ship, and often to the press and investors as well.

A couple of last concepts from the book that jumped out at me.

Red Hat Chairman Matthew Szulik used to say the #1 thing that kept him up at night was recruiting. Well, it turns out Jim Collins thinks Matthew was right to worry.

If I was to pick one factor above all others to use as a warning sign, it would be a declining proportion of key seats filled with the right people. Twenty-four hours a day, 365 days a year, you should be able to answer the following questions: What are the key seats in your organization? What percentage of those seats can you say with confidence are filled with the right people? What are your plans for increasing that percentage? What are your backup plans in the event that a right person leaves a key seat?

Now I’m going to be up at night too…

Jim Collins, you are my hero.

Chris Grams is Head of Marketing at Tidelift. He is also the author of The Ad-Free Brand: Secrets to Successful Brand Positioning in a Digital World.
View all posts by Chris Grams »
« Washington Monthly on healthcare reform and open source
On July 19, 1999, I started at Red Hat »