After 10 years at Red Hat, I’ll admit I am a little bit out of touch with what the corporate world looks like everywhere else. But after a recent conversation with someone out there in the non-Red Hat universe, I thought I’d pass on a quick tip they found helpful on how to create a more collaborative culture in your organization.

Tom Petty sez you should go "into the great wide open..."

The tip is simple. Default to open. Everywhere.

You begin sharing by default.

A quick example. Our group was lucky enough to (thanks to our talented global facilities director, Craig Youst) have the opportunity to help design our own office space. As part of the space design, we determined that we wanted no offices– everyone would be in a large, open collaborative space.

Everyone had the same sized cubes, and it didn’t matter how much of a muckety-muck you were or weren’t. If you wanted to have a private conversation, the space design included a series of private alcoves, where you could go talk with your doctor, or yell at your wife, or whatever you didn’t want to do in public. But the key is that you had to actively decide when placing a call, do I want to take this in private? Which is counter than the old-skool office design where you had an office with a door, and all conversations were private by default.

We also ensured there was a big public space adjacent to the cubes with no door (i.e. not a “meeting room”) so that when brainstorming sessions were happening, the people sitting nearby could participate however they wanted. In some cases, this meant the folks near the meeting would put their headphones on and ignore what was happening. But in other cases they passively listened, with perhaps a nugget of a new idea or two seeping into their heads every few minutes. And sometimes they actively engaged in the conversation from their desks, calling out a few ideas that helped the team.

After working in this world for a few years now, I can’t honestly imagine how we survived before defaulting to open. The biggest benefit is that you actually know what is going on around you. You overhear conversations. You pass on a tidbit of useful advice over the cube wall. You can see who is actually in the office.

Sure, there is a downside. Sometimes information or opinions that would be better off closed are accidentally aired publicly. Sometimes it’s a bit noisy. But that’s why God invented the “quiet voice,” good music, and headphones.

I’ve found the benefits of forcing yourself to ask “should I have this conversation in private?” rather than simply having it in private by default are enormous. Collaboration. Transparency. Openness. All that stuff Barack Obama keeps talking about.

Our office is only one example. After all, we have over 50 offices spread around the world, so openness must transcend physical space.

We’ve applied the “default to open” principle everywhere we can at Red Hat. We try to show transparency in decision-making. See my post about how we created the Red Hat Mission for one good example. We make brainstorming on important topics a company-wide volunteer opportunity– all good ideas welcome. The concept of default to open is deeply woven in the cultural DNA of the company and applied liberally. 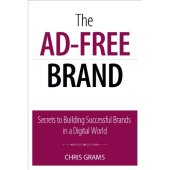 If so, you can find more tips about how to build your brand effectively in my book, The Ad-Free Brand (not an advertisement, mind you, just a friendly suggestion:).

Chris Grams is Head of Marketing at Tidelift. He is also the author of The Ad-Free Brand: Secrets to Successful Brand Positioning in a Digital World.
View all posts by Chris Grams »
« Brand positioning tip #2: the competitive frame of reference
Washington Monthly on healthcare reform and open source »