Those of you who have been following this blog for a while know it is based on the simple premise that there are some things out there in the world that are pretty difficult to see or measure, yet these same things can often be the stuff with the biggest impact. The intro to the blog tells the full story. 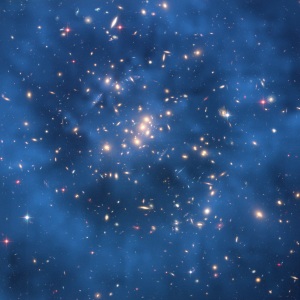 In the world of astronomy, two of these things are dark matter and dark energy. Both hard to see and measure.

In the world of business, three of these things are brand, culture, and community. Also tough to see and measure their impact in the business world.

Thought it might be worth taking a short break from our regularly scheduled program to give an update on how the astronomers are doing.

On June 20th, Reuters reported that the Large Hadron Collider, the mammoth particle collider I’ve talked about previously, is still broken. It’s now looking like October before it is working again. One of the goals of the project is to learn as much as possible about dark matter, and perhaps even create a dark matter particle. Hey, I’m not rushing them, even though I don’t buy into the end of the world stuff, there’s no sense in being hasty. Take your time and fix it right, I’ve watched a lot of disaster movies.

A few weeks ago, the Sanford Lab in Homestake, South Dakota, began work on a new underground research facility being built to study, you guessed it, dark matter. Called DUSEL (Deep Underground Science and Engineering Laboratory for you keeping score at home), it will be the world’s deepest underground science lab, with parts of it anywhere from 5000 – 8000 feet below the surface.

Why so far beneath the surface you ask? Apparently at this depth, the experiments will be shielded from cosmic rays that have a tendency to muck up these sorts of projects. The lab should open by 2012, with the deepest parts opening in 2016.

Some clarification from a combo marketing/astronomy expert

My friend Paul Salazar, who is also the guy who introduced me to the work of Jim Collins and a former Red Hat colleague, wrote me a few weeks back. Paul is not only a marketing whiz, he is also an amateur astronomer who writes an astronomy blog and occasionally is on the KFOG morning radio show in San Francisco. I don’t think he sleeps much. He writes:

Dark Matter is actually becoming more and more measurable because it has a gravitational effect but not an electromagnetic effect. The net is that you can look at a galaxy, measure all the light output, measure all the mass, figure out how much mass created the light output and subtract that from the total mass. The remaining amount? Dark Matter. It is understood in that is has mass and therefore gravity but no charge so although it is dark and not fully understood, it can be– at least with some degree of accuracy– measured. And because it has gravity, it is credited with keeping the galaxies together. They say the Milky Way has a halo of dark matter around it that keeps everything in place.

However, Dark Energy is another thing entirely. It is not clear if it has mass, and it has an electromagnetic force but it is exactly opposite that of matter as we know it. That is, it has anti-charge and anti-gravity effects and hence pulls stuff apart. And it is credited with keeping the dark matter and carbon matter from totally collapsing in on itself. So in a way, the delicate balance that keeps the cosmos intact is the dark matter holding the known worlds together and the dark energy pulling things apart. Take these out of balance and the entire universe would not be where it is today.

So there you have it. Dark Matter is definitely easier to measure than Dark Energy. But I still can’t touch either one of them, and I wouldn’t know them if they smacked me in the face. Which they are probably doing all day long. So technically it might have made more sense to call this blog Dark Matter and Dark Energy Matter. But then the alliteration wouldn’t have been as awesome:)

Chris Grams is Head of Marketing at Tidelift. He is also the author of The Ad-Free Brand: Secrets to Successful Brand Positioning in a Digital World.
View all posts by Chris Grams »
« What would Ayn Rand think of open source? You can vote!
New socialism? Naw, it’s the new individualism. »

4 thoughts on “Measuring dark matter? We’re working on it.”