At heart, Red Hat is an open source company.

Now that will either mean something to you or it won’t. If you aren’t familiar with open source, there are plenty of good sites that will teach you better than I will. 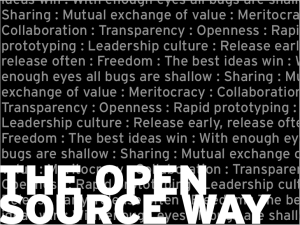 If you are familiar with open source, you are probably also familiar with some of the key concepts. I try not to be too precise about defining open source. To me, it is basically a DNA soup of related ideas which, when put together, make up the open source way. It is almost like a cultural map for a way of working and operating.

Many of these ideas are even found in the first note Linus Torvalds, the creator of Linux, sent out in 1991, when he kicked off his attempt to build his own operating system.

From: torvalds@klaava.Helsinki.FI (Linus Benedict Torvalds)
Subject: What would you like to see most in minix?
Summary: small poll for my new operating system
Date: 25 Aug 91 20:57:08 GMT
Organization: University of Helsinki

Hello everybody out there using minix –

I’m doing a (free) operating system (just a hobby, won’t be big and professional like gnu) for 386(486) AT clones. This has been brewing since april, and is starting to get ready. I’d like any feedback on things people like/dislike in minix, as my OS resembles it somewhat (same physical layout of the file-system (due to practical reasons)among other things).

I’ve currently ported bash 1.08 and gcc 1.40 and things seem to work. This implies that I’ll get something practical within a few months, and
I’d like to know what features most people would want. Any suggestions are welcome, but I won’t promise I’ll implement them :-)

Notice how Linus points out that he is releasing early— he’s not waiting until he has the operating system perfect before putting it out. He is transparent about it not being “big and professional.” He is inviting people to collaborate with him to figure out what would make it work best. And most importantly, he’s letting people know that it will be free (as in freedom) software, which means that anyone can download it, use it, and make their own changes to it.

Keep in mind that at this point, the term open source hadn’t even been invented yet, although free software had been around for years. Yet a cultural blueprint for the open source community was already in place. The culture? Open. Collaborative. Personal. A place where having the best ideas was more important than having power, management experience, or political prowess. Doesn’t sound like such a bad place, does it?

We’ve built Red Hat on this blueprint as well. When Red Hat is at it’s best, we communicate and collaborate with customers, users, developers, and partners in this spirit. Internally, we also try to train and incent people to work in an open source culture.

It’s not always perfect. When we are hiring employees who have not grown up in the open source culture, we often have to retrain them. As we have grown up, this has proved a difficult exercise. A big company needs experienced people who have already been successful at other big companies. To scale quickly, you can’t learn every skill every time by trial and error.

Hiring is the most critical element in building an open source company. It’s a delicate balance. You want people who can be effective in their jobs. But you also need people who can operate successfully in the culture, and won’t accidentally destroy it.

In my experience, training skills is much easier than training minds. Especially when the minds are already made up. Unlearning is much harder than learning. So if you want to build a successful company the open source way, you must focus on hiring people who have the right mindset first, the right skillset second.

You won’t regret it.

Chris Grams is Head of Marketing at Tidelift. He is also the author of The Ad-Free Brand: Secrets to Successful Brand Positioning in a Digital World.
View all posts by Chris Grams »
« Introduction
Give me something to believe in »