In the classic book Positioning: The Battle for Your Mind, by Jack Trout and Al Ries, there is an ongoing thematic—the overwhelming value of being #1 in a market. The reasoning? It is extremely hard to dislodge the company that captures a position in the minds of target customers first. 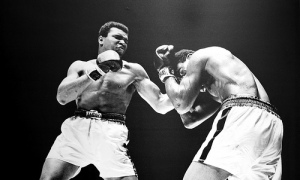 Think about how long Coca-Cola has been the #1 cola (since the 19th century) or Hertz has been the #1 car rental company (since 1918) and you’ll get a sense for how difficult it is to displace the top brand in a market.

As we’ve learned in previous brand positioning tips, a key part of the brand positioning process involves deciding on the competitive frame of reference or references in which you’d like to position your company or brand. I emphasize references because one thing to consider is whether, in addition to positioning your brand in an existing market (where you may not be #1), you should be creating a new market in which you can be #1, because there is no one else in it yet.

Some leading business strategy thinkers refer to this as a “blue ocean strategy” where you choose to create or grow a new market rather than fighting in a competitive one that already exists (a “red ocean”).

From a brand positioning perspective, I often return to a similar principle I call the 1-2 punch.

Punch 2: Lead the market you grow

Punch 1: You may compete in a frame of reference where you are not #1, but throwing punch 1 means putting your energy into creating or growing a different competitive frame of reference that didn’t exist in the minds of your audience before.

Punch 2: This is where you must really capitalize on the benefits of being an early mover in a market. If you throw punch one (grow the market), but do not effectively land punch 2 (lead the market you grow), you may find yourself in a world of hurt. Let’s look at a few examples:

END_OF_DOCUMENT_TOKEN_TO_BE_REPLACED

This morning’s New York Times had a great article entitled Multicultural Critical Theory. At Business School? highlighting the changes many business schools are making in the way they teach their students. Probably the most visible leader of this movement has been Roger Martin, Dean of the Rotman School of Management at the University of Toronto, who is prominently featured in the article (and will be speaking here in Raleigh next month at the Institute for Emerging Issues Forum).

What kind of changes are the schools making? From the article:

“While few [business schools] talk explicitly about taking a liberal arts approach to business, many of the changes are moving business schools into territory more traditionally associated with the liberal arts; multi-disciplinary approaches, an understanding of global and historical context and perspectives, a great focus on leadership and social responsibility and, yes, learning how to think critically.”

Why? Look around you. In business, we are currently experiencing a double crisis of ethics and innovation. Take the results of a recent Gallup poll on Honesty and Ethics of Professions. Americans now trust the ethics and honesty of businessmen less than lawyers. Ouch.

END_OF_DOCUMENT_TOKEN_TO_BE_REPLACED

Trying to change a 20th century corporate culture? Where should you start?

When I talk about the culture that we’ve built at Red Hat over the years around the principles of the open source way, one of the most popular questions I get is something along these lines.

That’s great and all, Chris. But Red Hat built its culture from scratch. My company culture has been the same for over 50 years. Can you change a deeply entrenched 20th century culture?

It’s a great question. Clearly there is a big advantage to being able to organically build a corporate culture from scratch. But, with support from the top levels of management, it is not impossible to change an entrenched culture, too.

Where do you start? Here are three tips:

END_OF_DOCUMENT_TOKEN_TO_BE_REPLACED

Whole Foods and the brand promise

Whole Foods is a clear example of a mission-driven company. Over the years, they’ve taken strong activist stances on a number of topics related to healthy living. In fact, they are one of the few big corporations that I’ve seen actually link to their values as a main navigation element on their homepage. You’ve probably also seen these same values posted in your local store. I think this is awesome.

And personally, I love Whole Foods. My guess is, based on their corporate values, that their core customer leans to the left politically.

This week, in the Wall Street Journal, John Mackey, CEO of Whole Foods, wrote an editorial entitled The Whole Foods alternative to Obamacare.

I see the strategy… a few weeks ago, Whole Foods launched a campaign to help empower Americans to lead healthier lives. At the campaign launch, Mackey even said Whole Foods is going to reverse the 14 year trend toward having more pre-processed food in their stores. I’m sure this editorial was one piece of a larger campaign strategy. And certainly most people would agree that Americans could use a healthier diet.

In moving from talking about healthier food into talking about healthcare, Whole Foods has hit on a massively politicized issue. When your core customers lean to the left, and as a corporate leader you take a position to the right, you take a risk that people might start to question whether they really affiliate themselves with your brand promise.