The astrophysics of building a brand from the inside out

It has been a while since I wrote an original post on this blog, so I thought over the next few months I’d try to make up for lost time by previewing some of the concepts from my new book The Ad-Free Brand: Secrets to Successful Brand Positioning in a Digital World, due out in August. If you like what you see, let me know. If not, well, I still have some time to make edits, so let me know that as well. But be gentle.

One of the key concepts in the book is that ad-free brands are brands built from the inside out. But what exactly does this mean?

Imagine for a second that a brand is a powerful star at the center of a solar system, maybe one like our Sun. For me, brand positioning is an attempt to describe the gravitational pull at the very center of that star.

Great brand positioning creates gravity that pulls people closer to the heart of the brand. As people move closer, the brand releases energy, in much the same way a star sends out heat and light.

So when beginning to roll out new brand positioning, one way to think of your work is as an attempt to mimic thermonuclear fusion within a star. No small feat, huh? 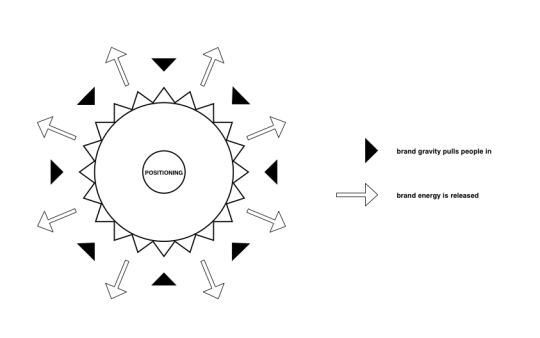 If you aren’t the least bit interested in astrophysics, or that explanation above did not resonate with you, let me try another, simpler one:

At some point, if enough people begin to deeply understand and live the brand in their daily work, magic happens.

American showman and circus entrepreneur P.T. Barnum was no astrophysicist, but he understood the power of this magic moment. His explanation: “Nothing draws a crowd like a crowd.”

Aligning a core, closely aligned group of people around the brand positioning is the only way to set off this particular reaction. And there is no better place to start rolling out your positioning than with those people who already work for your organization and have a vested interest in its success.

Building a brand from the inside out means building the brand by creating energy with the community of the people closest to the brand—those who work for the organization—and using the gravitation force this group creates to pull even more people close to the center of the brand.

Who is in your community? It seems like such a simple question.

In reality, your organization probably doesn’t just interact with one community, but a whole host of very different communities and sub-communities. The only thing these communities may share is that they are made up of individual human beings.

When asked to list the groups of people making up an organization’s community, most would probably end up with a list that looked something like this: