Positioning: The Battle for Your Mind

The title is The Ad-free Brand: Secrets to Successful Brand Positioning in a Digital World. It is intended to be a hands-on guide to help organizations of any size in any industry effectively position their brands in a what I’d call a post-advertising world.

I’m writing it not just for marketing/communications types, but for anyone who is interested in learning more about how to effectively position their brand using 21st century tools and strategies, whether the brand is a product, a website, a small business, a non-profit, a person, or a Fortune 500 company.

As those who’ve read my brand positioning tips know, I’m a bit of a positioning junkie. But my frustration has been that I haven’t found a really good resource that helps people manage and grow brands that can’t afford (or choose not to do) big fancy advertising campaigns. If you read through the classic texts like Positioning: The Battle for Your Mind by Jack Trout and Al Ries, they are filled with examples of executing positioning through advertisements, taglines, and marketing campaigns.

But as good as the positioning concepts themselves are, I’m not sure the advertising-driven execution of these concepts is as relevant in 2011 as it was in the 20th century. My goal with The Ad-free Brand is to teach people the timeless principles of good brand positioning, then show them how to apply them a new kind of way using the lessons I’ve learned from the open source world and elsewhere.

As some of you know, I spent the first part of my career in book publishing, first as a literary agent then as an editor. Writing a book is something I’ve always wanted to do, so I’m kind of excited, but also pretty nervous. Yikes!

The Ad-free Brand will be published by Pearson/Que sometime in Fall, 2011. I’ll keep you up to date on my progress along the way. Finally, I just want to say thanks for coming by and reading some of my posts this past year. If you notice me writing a few less original posts during the next few months, now you know why:)

Apple, Google, and the open vs. closed positioning war

Over the last few months, the battle to define the meaning of the word “open” has intensified into one of the more interesting brand positioning exercises I’ve seen in the technology industry (if you aren’t familiar with brand positioning and would like to learn more, consider starting here).

I thought I’d do a quick report from the front lines, diving in specifically to examine the battle for smartphone leadership, and looking at things from a brand positioning strategy perspective.

Think back to 2009 and the state of the smartphone industry. The iPhone had completely redefined the entire market, while Google was just beginning to see traction with Android and looking at a long struggle to catch up with Apple.

While most other smartphone makers were attempting to catch up playing by Apple’s rules in the market Apple defined (usually a losing strategy in the long term when the leader has a solid head start), Google took a different approach—they tried what now looks to me looks like a classic repositioning strategy.

Brand positioning tip #8: five great books you should check out

For today’s tip, I thought I’d compile a list of my five favorite brand positioning books in one place. I’ve tried to put them in some semblance of an order, with the must-reads at the top. 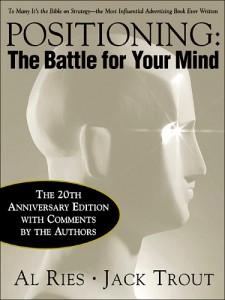 2. Strategic Brand Management by Kevin Keller: Not only a great book on positioning, but on every other aspect of brand management as well. I use Kevin Keller’s model every time I run a positioning exercise. If you have already mastered the intellectual side of the positioning concept, consider this book the how-to manual. Expensive– it is a business school textbook– but worth way more than five lesser branding books.

3. Zag by Marty Neumeier: He calls it “radical differentiation,” but this is at heart a book about brand positioning from the guy that wrote The Brand Gap, one of my favorite branding books. It’s short, well-designed, inexpensive, and easy to understand. What more could you want?

4. The 22 Immutable Laws of Marketing by Al Ries and Jack Trout: I have a soft spot for this book because it introduced me to the concept of positioning– I actually didn’t read the original Trout and Ries Positioning book until later. This is billed as a more general marketing book, but is still a positioning classic from the guys who invented the term.

5. Differentiate or Die by Jack Trout: Another classic from the usual suspect. Sure, by the time you read this, you’ll probably start feeling like you’ve heard it all before. After all, positioning is a fairly simple concept– just hard to execute well.

These books should set you on your way to a clear understanding of brand positioning. One last link: Jack Trout has a new book on positioning that just came out last fall called Repositioning: Marketing in an Era of Competition, Change and Crisis, and it is being billed as the 30th anniversary update of the original positioning concept. I haven’t read it yet, but have it on my Kindle ready to go and will write a post about it when I am finished.