Are you an expert in building communities? Prove it.

Over the past few months, I’ve started moonlighting as a contributor on the Management Innovation Exchange (MIX), which we’ve featured regularly on opensource.com. My posts on the MIX focus on how to enable communities of passion in and around organizations. 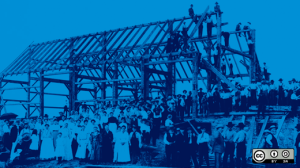 A few months ago, the MIX announced a new contest, the Human Capital M-Prize, which is looking for the best ideas on how to unleash passion in our organizations.

Since this particular challenge is right in my stomping ground on the MIX, and because many people who regularly read and contribute to opensource.com probably know better how to enable communities of passion than almost anyone else in the world, I thought I should highlight the contest in the hopes that some of you might enter.

The MIX and HCI are looking for the boldest thinking, most powerfully-developed vision, and the most cleverly-designed experiments for unleashing passion in our organizations. What is your bold new idea or radical solution to the lack of engagement and passion in our workforce? What game-changing story or hack can transform employees everywhere into more engaged, motivated and productive contributors?

If you have a story or hack you think might fit, go here to learn more or enter the contest.

The deadline for entries is January 20th—only about two weeks away.

The grand prize winner will get a chance to present their story or hack to a global audience at the HCI Human Capital Summit in Atlanta in March, and there are other interesting prizes as well. So if this sounds compelling to you, get on over to the MIX and submit your entry.

Make our community of passion at opensource.com proud and let’s show these future-of-management-types that we open source folks know a thing or two about building community.

The other day I was chatting with friend and digital strategy/social media expert Ken Burbary on the phone. He was advising a colleague on some good community-building techniques to consider when all of the sudden the following words came out:

“You have to find your cheeseheads.”

What? I did a double-take (or at least the conference call equivalent) and asked him to repeat himself.

I had heard him correctly.

Ken lives in Michigan. Michigan is not far from Wisconsin. Wisconsin is where a lot of cheese is made. Wisconsin also has an (American) football team called the Green Bay Packers.

So Ken was saying that good community catalysts seek out and empower the biggest community supporters and advocates—the cheeseheads.

I found a fantastic blog post, written last fall by a colleague of Ken’s named Rachel Happe, entitled Cheeseheads. The post, which appears on The Community Roundtable website, explains in more detail the concept of how to engage your community’s cheeseheads. I won’t repeat Rachel’s advice here, but instead want to ask a follow-on question:

Sitting at a football game at Lambeau Field, it’s pretty easy to spot most of the biggest fans. They have foam cheese on their heads.

But what you do when a community isn’t the foam-hat-wearing kind? How do you find and empower the people who are the community’s energy source? Here are a few thoughts from me on how to find the biggest community advocates when they aren’t in plain view.