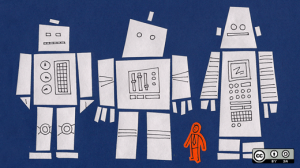 Many of the characteristics of this open source management style apply well beyond making software, and I’m always looking for examples showcasing this in action. A few weeks ago, I wrote briefly about the story in Malcolm Gladwell’s book Blink about (now retired) US General Paul Van Riper.

Gladwell tells the story of how, in an enormous military war game called the Millennium Challenge in 2002, Van Riper took command of the Red Team, playing the role of a rogue commander who broke away from the government of his Persian Gulf country and threatened US forces (the Blue Team). Rather than following standard military management protocol, Van Riper managed his team according to a philosophy he called “in command and out of control.” From the book:

By that, I mean that the overall guidance and the intent were provided by me and the senior leadership, but the forces in the field wouldn’t depend on intricate orders coming from the top. They were to use their own initiative and be innovative as they went forward.

END_OF_DOCUMENT_TOKEN_TO_BE_REPLACED

Is your brand out of control?

I’m lucky enough to have the opportunity to spend much of my time these days doing something I love—helping clients position and manage their brands. My experience helping build the Red Hat brand over ten years had a profound impact on the approach I take to brand positioning. 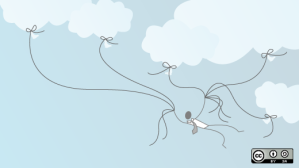 In the past year, as I’ve applied open source principles I learned at Red Hat to brand positioning projects in many different types of organizations, I’ve started thinking a mashup of classic brand positioning concepts and tenets of the open source way might help provide some clues for how brands might be better managed in the future.

I’ve put my time where my mouth is, and am currently in the process of writing a book entitled The Ad-free Brand: Secrets to Successful Brand Positioning in a Digital World, which will be published this fall.

Rather than writing the book behind closed doors and only revealing the finished product, I thought I’d share some of my ideas with you along the way, taking a cue from the open source way and releasing early and often.

Today, I’d like to explore the traditional role of brand positioning, and share some ideas for how I believe it might change to remain relevant in a digital world.

Typical marketing experts would define positioning as the art of creating meaning for a brand that occupies a distinct, valued place in the minds of members of a target audience.

But is the idea of an audience for brand messages outdated? Certainly in the heyday of traditional advertising, brands had an audience. The brands spoke, consumers listened… or didn’t.

END_OF_DOCUMENT_TOKEN_TO_BE_REPLACED

When we are at our best at Red Hat, we have a leadership culture instead of a management culture. 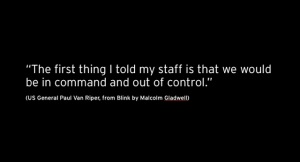 The story is about US General Paul Van Riper, who is trying out some military strategies to see how they will work in the field. In the book he says:

“The first thing I told my staff is that we would be in command and out of control.”

Most companies have a culture of management. The people in charge are in command and in control of everything. Managers give the orders, decide the strategy, and the workers follow the orders, implement the strategies. This is the way 90+% of businesses work and have worked for a very long time. It’s a good model for lots of businesses. Keeps things running efficiently, keeps chaos in check.

This model does not work very well in an open source world. Why? A couple of key reasons: END_OF_DOCUMENT_TOKEN_TO_BE_REPLACED