After almost 25 years, Coca-Cola has decided to drop the “Classic” label from its Coke cans. See the Wall Street Journal article here. 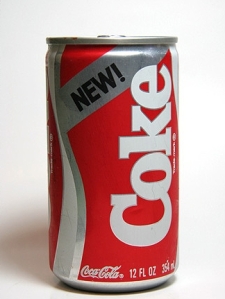 This is a perfect example of one of my favorite quotes about building brands, from Amazon.com’s Jeff Bezos:

“A brand for a company is like a reputation for a person. You earn reputation by trying to do hard things well. People notice that over time. I don’t think there are any shortcuts.” – BusinessWeek, August, 2004

In 1985, Coca-Cola made one of the most famous brand “mistakes” of all time, introducing New Coke to replace their classic formula. It took them 25 years to make the conversion back to where they started.

Now I’m not saying you need this much time to make any brand transition, but it does make you think. Are you moving too quickly with a branding change? Do you risk throwing some of your existing brand equity away? Or could you harvest that equity and move it with you if you just took some more time?

After all, there are no short cuts. Might as well take the time to do it right.

Have you ever been zooming in on a Google map, and eventually you zoom so far in that Google apologizes and tells you that it doesn’t have an image showing stuff that close? What do you do? You zoom back out so that you can see again.

When it comes to running campaigns, I tend to take metrics with a few grains of salt. How many times have you seen someone report metrics on how their campaign did, and they show that it drove zillions of leads and that converted to zillions of $$ in sales and was a huge success… but then you look around and can’t find anyone who saw the campaign, or heard of it. And the sales guys couldn’t ever even tell it happened.

END_OF_DOCUMENT_TOKEN_TO_BE_REPLACED

In command and out of control as marketing strategy

In my last post, I talked about the idea that General Paul Van Riper called being “in command and out of control” as a corporate leadership strategy. But can you also apply the same principle as a marketing strategy?

A traditional marketing campaign usually looks something like this: